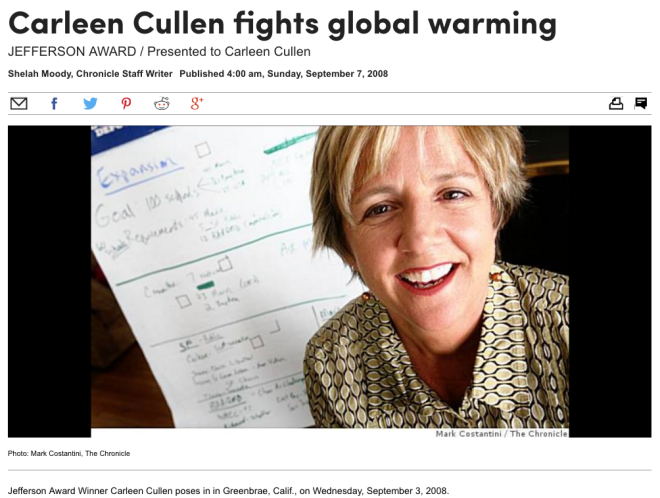 In her 20s, Carleen Cullen launched a successful medical and scientific software company in Manhattan called Ovid Technologies, which grew into a global company with 125 employees and enabled her to retire.

Cullen and her husband, Jeff, settled in Marin County to raise their two children and to lead a quiet life away from the bustle of Manhattan. But the couple’s lives changed forever after they saw Al Gore‘s documentary “An Inconvenient Truth” in 2006.

“We’d been peripherally aware of climate change, but not involved at all,” said Cullen. “Like a lot of people, I walked out feeling pretty depressed about the future.”

Cullen spent the summer of 2006 reading every book she could on the problem of climate change and poring through scientific databases. She discovered overwhelming evidence that the climate was changing in a dangerous way. Clearly, something needed to be done.

In 2007, Cullen launched Cool the Earth, a program designed to educate children and their families about climate change through taking action, at Bacich Elementary School in Kentfield.